The modern scenario dreams and breathes marketing courtesy of the advancements in media and advertising technologies. The methodology with which a product is advertised holds more value than the product itself. For this exact reason, companies invest in various advertisement technologies and concurrently keep on check on the behaviour of customers.

About media—it imparts knowledge. The media's role in businesses can be comprehended through its extensive influence on the market. Basil Infotech believes that Media can make and break a business and therefore, organizations should be keen on developing an image that aligns the media in their favour. After all, it is media that holds a direct connection with the generality. 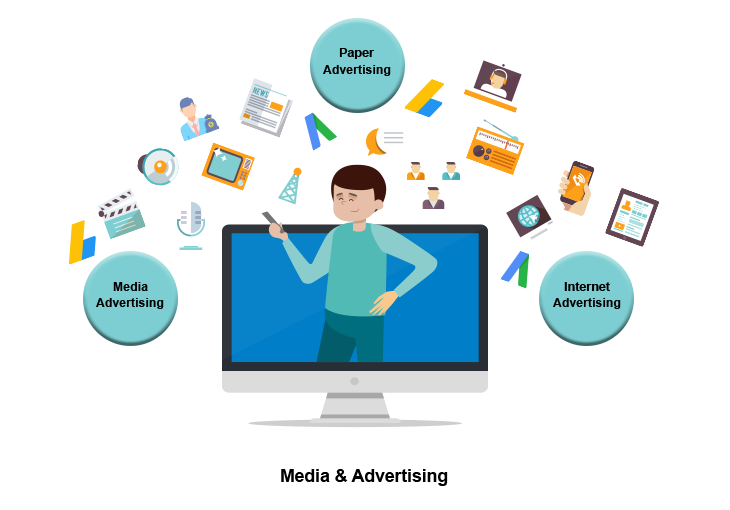 ROLE OF ADVERTISING AND MEDIA

Advertising, in concrete terms, is a paid promotion of the services or products on the Internet, television, radio or printing platforms. Advertising is not a new term, it has been a buzzword from a long period, and its prominence isn't going to end any soon. The fact that it supports a variety of institutions, media outlets, technology companies, the finance sector, and search engine companies makes it one of the biggest contributors to the press. According to the 2014 report of the Newspaper Association of America, advertisements generate 80 % of the total revenue of online and offline press. Ain't these numbers staggering?

Advertising is fostered through the media's consciousness. In other words, it is media that drives the pipeline of awareness and spreads information about products and services. In addition to that, the media plays the role of persuasion, something that can be effectively garnered only when advertising is top-notch. Confused? Well, advertising and media have transformed their outlook courtesy of the technological advancements. Scroll down to know more.

HOW DO BUSINESSES ADVERTISE?

If only there were a proper means of advertising your products on every platform. Favourably, there are!

Amidst the ever-increasing competition, it is essential that businesses recognize their needs and accurately analyzes their audience. This is because marketing is principally dependent upon the knowledge of the business. Nevertheless, good advertising can always land your business in a worth-noticing state.

BUSINESSES USE INTERNET FOR ADVERTISING

While it is an all-new method of advertising, it has already been tested on various fronts. Companies use Internet advertisements to display their ads on the pages of websites. In doing so, they assist the websites to drive revenue and, thus, it runs like a conventional regulation of events. Most businesses stick to prominent tools such as Google Adwords and Adsense for keeping themselves high on the search engine rankings. Besides, Internet Advertising also facilitates the digitization of old old print advertorials and sponsored content.

Advertising goes beyond platform-dependency. With mobile applications soaring and devices increasing exponentially, companies leverage the advertising technologies to create mobile-friendly advertisements that can be displayed on popular social media platforms such as Twitter, Snapchat, Linkedin, Facebook, Instagram, and Youtube.

No, we aren't hoaxing around because paper advertising remains one of the biggest game-changers even in the current market. Both Periodical Advertising and Point-of-Sale marketing are utilized for displaying ads in magazines and newspapers. Having said that, it should be noted that print advertisements are of great value, especially when you know the parameters governing your target audience.

BASIL: CONSTANTLY AT YOUR SERVICE

It is strange how most advertisements fail even after they are formulated with the utmost care and administered by marketing professionals. Oftentimes marketing is indeed given priority over the product's quality; however, that doesn't mean a bad product can be marketed for a prolonged period. If you are doing it, you are in the wrong direction altogether.

We believe that your advertisements can only become valuable when they advertise excellent services and products. In short, collaborate with us to swiftly pull-off your business' short- and long-term objectives.